“Once-upon-a-time tens of thousands of Australian children contracted polio,
recovered, got on with their lives (some even became artists!),
and they all lived happily ever after.”
~ The End ~

Or not . . . The “Touched by Polio ~ from casts to catharsis” art exhibition tells a myriad stories through thirty-five ‘artified’ leg and torso plaster casts.

“Touched by Polio” reflects on the often evoked ‘torture’ associated with childhood polio and transforms that painful memory into a thing of value and/or beauty – much like the lives of Australia’s polio survivors who became artists themselves.

Check out all the art works, and learn about the artists who crafted them, on Polio Australia’s Touched by Polio website.

The “Touched by Polio” art exhibition will be launched by Senator Mitch Fifield, Shadow Minister for Disabilities, Carers and the Voluntary Sector, on Wednesday 27 March 2013 from 6:00 pm to 08:00 pm at the Kew Court House, 188 High Street, Kew, Victoria.

All the works will be up for auction at the launch, called by Guest Auctioneer, Ross Hedditch. Those pieces not sold at the launch can be bid for online on the Touched by Polio website. 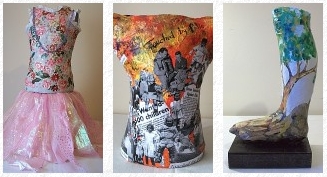